Toronto, Ontario, February 28, 2018 – Aurania Resources Ltd. (TSXV: ARU) (“Aurania” or the “Company”) is pleased to report that further stream sediment sampling and geological mapping has increased the number of targets in the Latorre area to five, from the two previously reported. The chemical signature and geological features of these targets are typical of the upper parts of epithermal gold-silver systems. Aurania’s management believes that alluvial gold discovered in stream gravel 2 kilometres from Aurania’s exploration concession boundary has been eroded from the Latorre area.

Aurania’s founder and CEO, Dr Keith Barron commented, “The Latorre area is developing into a large and growing target for epithermal gold-silver.  We are seeing characteristics that are not only similar to those that led to the discovery of the Fruta del Norte gold-silver deposit, 110 kilometres to the south, but also to the Alto Chicama deposit (Lagunas Norte Mine) in northern Peru.  The identification of numerous diatreme breccias – cylindrical bodies of broken rock caused by volcanic eruption – in the Latorre area, is reminiscent of those that host a large part of the gold-silver endowment at Alto Chicama.  Our plan is to dedicate several teams to advancing work on the Latorre target area while the remainder of our staff drives forward on the stream sediment sampling program.”

There is extensive geological evidence that the Latorre area contained a hot spring system.  Some of this evidence includes:

A video of geysers in the Yellowstone National Park that illustrates what we picture for the formation of the Latorre area can be found at  https://yellowstonenaturalist.com/geyserwatch/

Metal enrichment identified with stream sediment sampling in the Latorre area has identified five targets – two of which were discussed in the January 11, 2018 press release.  The five targets have been labeled ‘Latorre East’, ‘Latorre West’, ‘Latorre A’, ‘Latorre B’ and ‘Latorre C’.  These are areas of enrichment of pathfinder elements including arsenic, antimony, mercury, thallium, selenium, silver and molybdenum (Figure 1).  Arsenic, antimony, and mercury are referred to as “volatile” elements and can be vapourized at low temperatures and enriched in steam vents and geothermal conduits above deeper gold and silver mineralization, where the geothermal fluids are boiling.  When they are co-enriched, these volatiles provide evidence that there could be a significant gold deposit directly below, as was the case at Fruta del Norte.  The results are therefore highly encouraging.

The Latorre A target is located 2 kilometres upstream of a small placer gold mining operation that is run by informal miners.  The placer gold being mined is likely to have been eroded from the headwaters of the streams that lie in Aurania’s exploration concession area.

Management is excited by the discovery of large blocks of “vuggy silica” several metres in size in the Latorre B area.  This is characteristic of high sulphidation epithermal systems of which Alto Chicama in Peru, is an example.  This silica is light and porous because many of the original minerals have been dissolved by extremely acidic geothermal water, leaving cavities or “vugs” in insoluble silica.  The exploration team has also discovered a diatreme breccia that is up to 700 metres in diameter, adjacent to the Latorre B target.  Large blocks of iron-stained diatreme breccia occur throughout the target area, indicating that there has been extensive oxidation of sulphides.  Deep oxidation is a feature that lends itself to low cost heap leach exploitation.

An abundance of silica blocks has also been discovered in the Latorre C area.  The silica is chalcedonic in nature and has textures that are indicative of formation in a hot spring environment.

A photo gallery of rock samples and outcrops from the Latorre target area can be found at http://aurania.com/investors/media/gallery/

Dr. Richard Spencer commented, “We are delighted that there is evidence of a geological environment for gold-silver mineralization in the Latorre area.  Our experienced team of geologists are focusing their efforts on the targets in this area – an area that covers approximately 100 square kilometres.  We have commenced detailed geological and alteration mapping and rock-chip sampling of this swarm of diatreme breccias and silica-enriched zones.  Soil sampling is expected to refine specific target areas for trenching and subsequent drilling.  Our aim is to commence scout drilling in the highly prospective Latorre area later this year.” 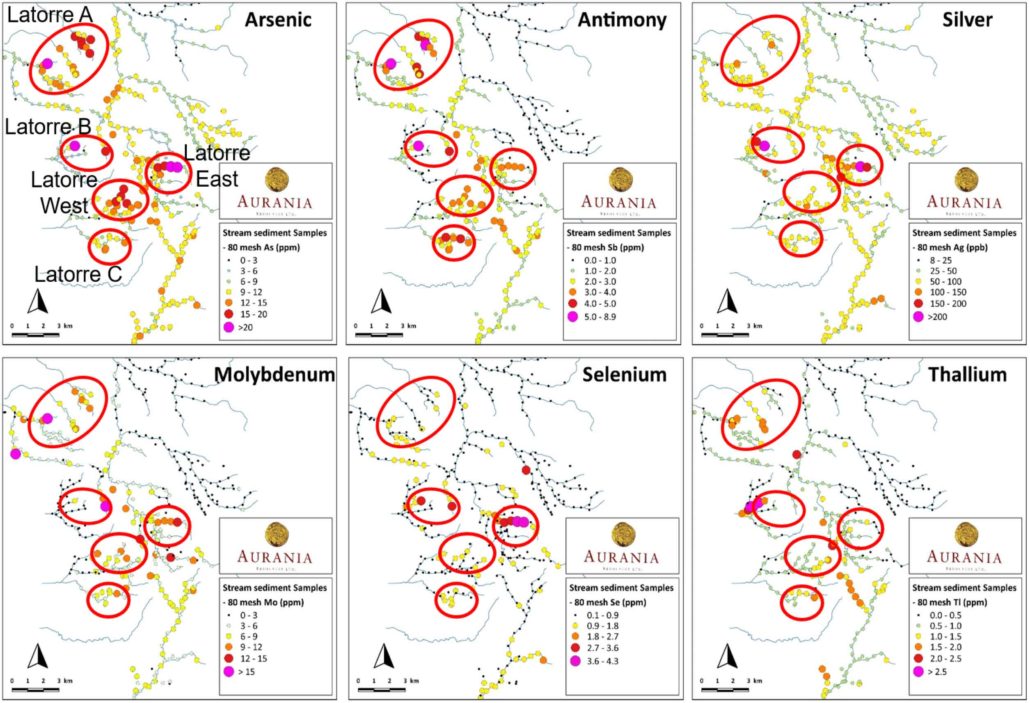 The technical information contained in this news release has been verified and approved by Jean-Paul Pallier, MSc., Aurania’s VP-Exploration.  Mr. Pallier is a designated EurGeol by the European Federation of Geologists and a Qualified Person as defined by National Instrument 43-101, Standards of Disclosure for Mineral Projects of the Canadian Securities Administrators.

Aurania is a junior exploration mining company engaged in the identification, evaluation, acquisition and exploration of mineral property interests, with a focus on precious metals and copper.  Its flagship asset, The Lost Cities – Cutucu Project, is located in the Jurassic Metallogenic Belt in the eastern foothills of the Andes mountain range of southeastern Ecuador.

Information on Aurania and technical reports are available at www.aurania.com and www.sedar.com, as well as on Facebook at https://www.facebook.com/auranialtd/, Twitter at  https://twitter.com/auranialtd, and LinkedIn at https://www.linkedin.com/company/aurania-resources-ltd-.

Neither the TSXV nor its Regulation Services Provider (as that term is defined in the policies of the TSXV) accepts responsibility for the adequacy or accuracy of this release.

This news release contains forward-looking information that involves substantial known and unknown risks and uncertainties, most of which are beyond the control of Aurania. Forward-looking statements include estimates and statements that describe Aurania’s future plans, objectives or goals, including words to the effect that Aurania or its management expects a stated condition or result to occur. Forward-looking statements may be identified by such terms as “believes”, “anticipates”, “expects”, “estimates”, “may”, “could”, “would”, “will”, or “plan”. Since forward-looking statements are based on assumptions and address future events and conditions, by their very nature they involve inherent risks and uncertainties. Although these statements are based on information currently available to Aurania, Aurania provides no assurance that actual results will meet management’s expectations. Risks, uncertainties and other factors involved with forward-looking information could cause actual events, results, performance, prospects and opportunities to differ materially from those expressed or implied by such forward-looking information. Forward looking information in this news release includes, but is not limited to, Aurania’s company’s objectives, goals or future plans, statements, exploration results, potential mineralization, the corporation’s portfolio, treasury, management team and enhanced capital markets profile, the estimation of mineral resources, exploration and mine development plans, timing of the commencement of operations and estimates of market conditions. Factors that could cause actual results to differ materially from such forward-looking information include, but are not limited to, failure to identify mineral resources, failure to convert estimated mineral resources to reserves, the inability to complete a feasibility study which recommends a production decision, the preliminary nature of metallurgical test results, delays in obtaining or failures to obtain required governmental, regulatory, environmental or other project approvals, political risks, inability to fulfill the duty to accommodate First Nations and other indigenous peoples, uncertainties relating to the availability and costs of financing needed in the future, changes in equity markets, inflation, changes in exchange rates, fluctuations in commodity prices, delays in the development of projects, capital and operating costs varying significantly from estimates and the other risks involved in the mineral exploration and development industry, and those risks set out in Aurania’s public documents filed on SEDAR. Although Aurania believes that the assumptions and factors used in preparing the forward-looking information in this news release are reasonable, undue reliance should not be placed on such information, which only applies as of the date of this news release, and no assurance can be given that such events will occur in the disclosed time frames or at all. Aurania disclaims any intention or obligation to update or revise any forward-looking information, whether as a result of new information, future events or otherwise, other than as required by law.

Update on Aurania’s Events During PDAC 2018
Scroll to top