Six drill holes have been completed on Targets A, B and C on the Yawi epithermal gold-silver target area.  Assay results have been received for the first four holes; no significant gold-silver mineralization was intersected.  However, alteration mineral and pathfinder element vectors are being used to refine the target as drilling continues at Yawi (see Figure 1).  In addition, findings at Yawi have refined Aurania’s understanding of its Crunchy Hill target and a target concept has been better defined in the area of the last hole drilled there.

Aurania’s Chairman and CEO, Dr. Keith Barron commented, “The first drill holes at Yawi have provided us with a clear picture of the nature of the epithermal target and we are using vectors evident in the drill core to direct our exploration towards the more prospective parts of the epithermal system.  The maar-diatreme environment we have discovered in core is a well-known environment for epithermal mineralization.  We are focusing on the margins of the column-shaped diatreme pipes identified in the early drilling because these so-called ring fractures are often mineralized.  We also have built enough confidence and knowledge of the subsurface geology to now employ focused geophysics to more accurately direct our drilling.  Aurania is looking into using Controlled-source Audio-frequency Magnetotellurics (CSAMT) that has been used so successfully by Irving Resources to refine their epithermal targets in Japan.”

The drilling has revealed a large maar-diatreme system at Yawi.  Maar-diatremes, as explained in the video “Initial Take on Yawi Drilling” are highly prospective for epithermal gold-silver. To access the video, please click on this link: http://www.aurania.com/initial-take-on-yawi-drilling-video/. Vectors derived from mineral alteration and pathfinder element analyses from the drill core are being used to steer the scout drilling towards the prospective parts of the system.  To this end, hole YW-006 was drilled from the same platform as hole YW-003 on Target B, targeting the hotter part of the hydrothermal system.

The maar-diatreme environment identified at Yawi has helped to refine a target at Crunchy Hill.  The last bore hole drilled at Crunchy Hill in 2019 intersected modest silver mineralization of 4m at 7g/t silver on the margin of a diatreme where alteration and characteristics of the silica associated with the mineralization are indicative of the upper reaches of an epithermal gold-silver vein system.  The target lies on the margin of the diatreme at depth beneath the CH-009 bore hole intercept.  This target could be drilled from the same drill platform from which bore hole CH-009 was drilled. 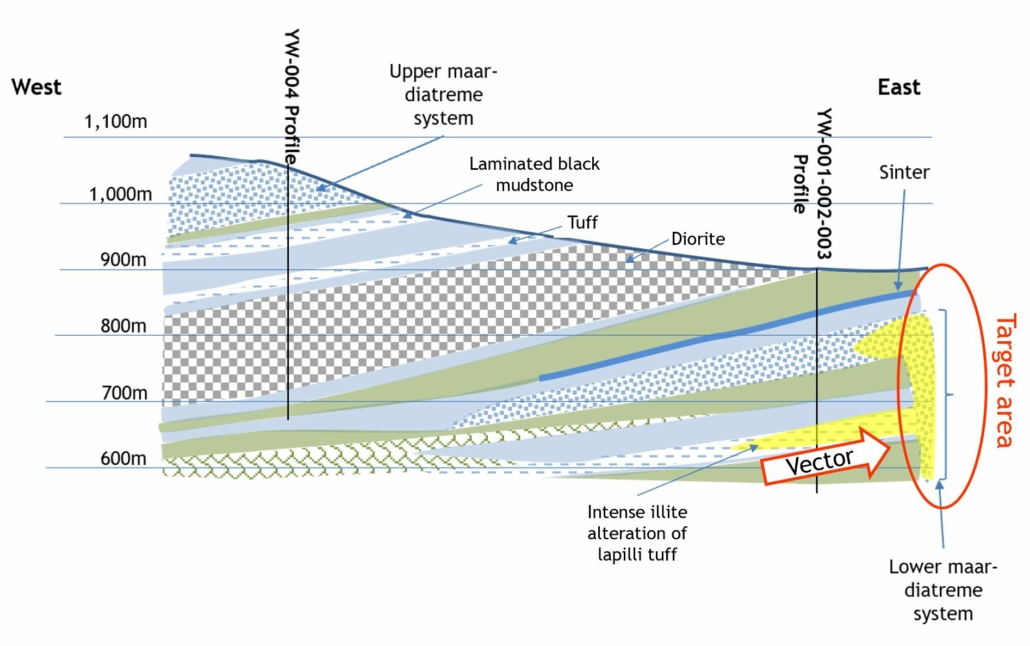 Details of Drilling at Yawi

The technical information contained in this news release has been verified and approved by Jean-Paul Pallier, MSc.  Mr. Pallier is a designated EurGeol by the European Federation of Geologists and is a Qualified Person as defined by National Instrument 43-101, Standards of Disclosure for Mineral Projects of the Canadian Securities Administrators.

Aurania is a junior mineral exploration company engaged in the identification, evaluation, acquisition and exploration of mineral property interests, with a focus on precious metals and copper.  Its flagship asset, The Lost Cities – Cutucu Project, is located in the Jurassic Metallogenic Belt in the eastern foothills of the Andes mountain range of southeastern Ecuador.

Information on Aurania and technical reports are available at www.aurania.com and www.sedar.com, as well as on Facebook at https://www.facebook.com/auranialtd/, Twitter at  https://twitter.com/auranialtd, and LinkedIn at https://www.linkedin.com/company/aurania-resources-ltd-.

This news release may contain forward-looking information that involves substantial known and unknown risks and uncertainties, most of which are beyond the control of Aurania. Forward-looking statements include estimates and statements that describe Aurania’s future plans, objectives or goals, including words to the effect that Aurania or its management expects a stated condition or result to occur. Forward-looking statements may be identified by such terms as “believes”, “anticipates”, “expects”, “estimates”, “may”, “could”, “would”, “will”, or “plan”. Since forward-looking statements are based on assumptions and address future events and conditions, by their very nature they involve inherent risks and uncertainties. Although these statements are based on information currently available to Aurania, Aurania provides no assurance that actual results will meet management’s expectations. Risks, uncertainties and other factors involved with forward-looking information could cause actual events, results, performance, prospects and opportunities to differ materially from those expressed or implied by such forward-looking information. Forward looking information in this news release includes, but is not limited to, Aurania’s objectives, goals or future plans, statements, exploration results, potential mineralization, the corporation’s portfolio, treasury, management team and enhanced capital markets profile, the estimation of mineral resources, exploration and mine development plans, timing of the commencement of operations and estimates of market conditions. Factors that could cause actual results to differ materially from such forward-looking information include, but are not limited to, failure to identify mineral resources, failure to convert estimated mineral resources to reserves, the inability to complete a feasibility study which recommends a production decision, the preliminary nature of metallurgical test results, delays in obtaining or failures to obtain required governmental, regulatory, environmental or other project approvals, political risks, inability to fulfill the duty to accommodate indigenous peoples, uncertainties relating to the availability and costs of financing needed in the future, changes in equity markets, inflation, changes in exchange rates, fluctuations in commodity prices, delays in the development of projects, capital and operating costs varying significantly from estimates and the other risks involved in the mineral exploration and development industry, and those risks set out in Aurania’s public documents filed on SEDAR. Although Aurania believes that the assumptions and factors used in preparing the forward-looking information in this news release are reasonable, undue reliance should not be placed on such information, which only applies as of the date of this news release, and no assurance can be given that such events will occur in the disclosed time frames or at all. Aurania disclaims any intention or obligation to update or revise any forward-looking information, whether as a result of new information, future events or otherwise, other than as required by law.