Protecting the environment on the front lines 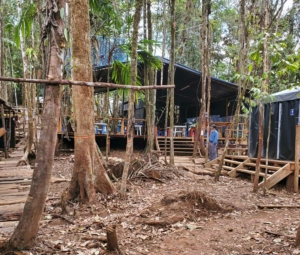 Camps that are built to support scout drilling programs are designed to be occupied for a few months, and then would be upgraded if a discovery is made in the drilling or abandoned if the scout drilling is unsuccessful. The camps consist of wooden platforms with boards cut from fallen trees, with temporary, sheet plastic roofs.

Keeping a camp clean is a major undertaking in muddy jungle. The entry point to the dining and living area of the camp had a boot-washing station that proved invaluable in keeping the camp clean. Muddy water from the boot washing station gravitated into settling tanks from which mud was cleaned and dried every few weeks.  Sleeping areas consist of two-person tents set on the wooden platforms.

The kitchen is a core component of the camps – the cooks getting up at 3:30 am each morning to prepare breakfast and packed lunches for the 60-80 people in the camp. The kitchens are basic, but efficient.  Water from local streams is filtered so as to be potable, and the cooking is done on gas cooktops.  These camps are remote and waste management is a key area of focus. 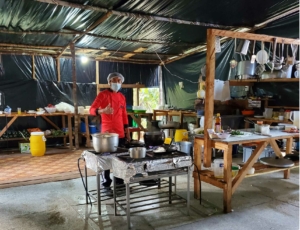 Compostable waste from the kitchen at each camp goes to a vermiculture station and the compost generated is used in the restoration and revegetation of the drill platforms that the camp served, as well as for revegetation of the camp area when the camp is to be removed entirely. Grey water from the kitchen, showers and laundry area, as well as sewage flows into a buried biodigester that is brought into the camp by helicopter.

The outlet from the kitchen is equipped with grease traps, from which grease and fat is collected and placed in plastic containers for removal from site. The grease and fat are poured into a mound composed of equal parts of chicken manure, topsoil, and coarse wood shavings. The wood shavings help to allow air into the mixture. The mixture is kept reasonably moist. It takes about six weeks for the microbes in the chicken manure to break down the fats and grease, leaving no trace of these oily masses. This material is used as compost in the plant nursery.

Each person resident in the camp is issued with biodegradable soap that is made by a local foundation from extracts of plants that are indigenous to the region. Bamboo toothbrushes are used as well as biodegradable cutlery and crockery is used where practical. These items are made by an Ecuadorian rainforest foundation. 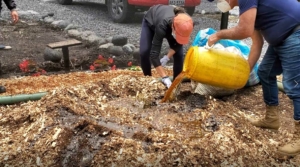 Figure 10. Bio-treatment of waste oil from the drilling and exploration camps. The oil and grease is poured into an mixture of equal quantities of chicken manure, coarse sawdust and topsoil, is moistened with water, and left to decompose for compost.

Laundry is done by people in the local communities where basic washing areas have been established with grease traps, after which the water gravitates into a French drain.

Used motor oil from servicing of the motors that power the hydraulic drills is removed and delivered to the appropriate municipal management facility located in the larger municipal centres such as the town of Macas. Toxic waste, principally batteries, is collected and delivered to a facility that is registered with the Ministry of Environment and Water. Biohazard waste, the volume of which has increased significantly with the collection of masks and other protective equipment related to our COVID-19 protocols, is flown out by helicopter and delivered to appropriately registered entities in the larger cities. This material is removed by helicopter and delivered by vehicle to the larger municipal centres that are equipped with adequate disposal facilities.

The drill camps provide a fertile training ground for communities that have no government-sponsored waste management program, which results in uncontrolled garbage accumulation in these isolated locations. The camps provide an environment in which local people can see how Aurania minimizes its environmental footprint through practical waste management. The introduction of worms caused much amusement for the local people – which changed to amazement as the organic waste transformed into compost. The next step is being invited to help implement modest waste management systems in the local villages, as well as finding means of incentivizing recycling.